PPP Flexibility Act was signed June 5, 2020 with significant changes to timing and flexibility. Read the comparisons between the CARES Act and Flexibility Act.

Up to 100% of the PPP loan is eligible for forgiveness. Read some of the latest clarifications below.

Read the most recent guidance from the SBA and Treasury to ensure that you maximize your loan forgiveness.

Some additional PPP links and resources.

On June 5, 2020, President Trump signed into law the Paycheck Protection Program Flexibility Act.  The new law makes significant updates and modifications to the original program created by the CARES Act signed in March 2020.   Based upon feedback from small business owners, the law is more flexible with regard to timing and usage of funds.   Please take a look at the information below as a guide as well as continue to monitor official sites as more clarification becomes available.

**Information below is subject to change, please speak with professional for specific guidance and/or advice

8- Weeks from the disbursement of the PPP loan.

Note:  A borrower who received a loan before the PPP Flexibility Act’s enactment may elect to continue using the original 8-week covered period.

75/25 rule At least 75% of funds must be spent on payroll costs and no more that 25% on allowable non-payroll costs, with partial forgiveness where less than 75% spent of payroll costs.

60/40 rule At least 60% of the PPP loan proceeds must be used for payroll costs to qualify for loan forgiveness and no more than 40% spent on allowable non-payroll costs.

Note:  The new 60/40 rule appears to be a “cliff’”, with no forgiveness is available if less than 60% of funds are spent on payroll.  However, members of Congress have already asked the administration to interpret it as just the level at which full forgiveness can be obtained, and have suggested a Technical Correction to the bill to make this change.

A failure to rehire employees and/or reinstate salaries by 6/30/2020  triggers a proportional reduction in forgiveness eligibility.

A failure to rehire employees and/or reinstate salaries by 12/31/2020 triggers a proportional reduction in forgiveness eligibility.

Note:  The PPP Flexibility Act would exempt borrowers from proportional loan forgiveness due to a reduction in employees, if the borrower is able to document in good faith that for the period of February 15 to December 31, 2020, the borrower was unable to:  rehire employees who had been employed on February 15, 2020, or hire similarly qualified employees for unfilled positions by December 31, 2020; or

2 Years for the portion of loan that isn’t forgiven

5 Years for the portion of loan that isn’t forgiven

Note: This change in loan terms is only mandatory as of the Act’s enactment and apply to any PPP loan made on or after such a date.  The Act also specifically allows (but does not require) lenders and borrowers to negotiate any term between 5 an 10 years for loans made prior to that date.

6 months from the loan origination date

Date on which amount of forgiveness is remitted to lender, up to 10 months after the last day of the covered period

Note:  If a borrower fails to apply for loan forgiveness within 10 months after the last day of the covered period for PPP loan forgiveness, the borrower must begin to make payments of principal, interest, and fees on its PPP loan.

Employers can only defer payment of FICA due for the period of March 27, 2020 through date of PPP loan forgiveness

What are permitted uses for PPP loans?

How will the amount of loan forgiveness be determined? Can a PPP loan be fully forgiven

Yes, the amount of the loan can be fully forgiven as long as certain conditions are met. The specific amount will generally depend in part on what portion of the loan is used on eligible payroll costs and whether the employer has maintained staffing and pay levels during the covered period.

A loan may be fully forgiven if all the following three conditions are met:

What is the period within which I must spend my loan proceeds to obtain full loan forgiveness?

How will the determination of whether my business has maintained staffing levels be made?

Seasonal employers may compare the average FTEEs employed during the Covered Period or Alternative Payroll Covered Period to either period listed above or to any consecutive twelve-week period between May 1 through September 15, 2019.

When calculating the amount of loan forgiveness, how will the determination of whether my business has maintained pay levels be made?

Repayment of part of the loan may be required if an employee’s average annual salary (for salaried employees) or average hourly rate (for hourly employees) are reduced by 25% or more during the Covered Period or Alternative Payroll Covered Period compared to the period of January 1 though March 31, 2020.

Note: When comparing wage levels to determine if your loan forgiveness amount will be reduced, employees who earned wages or a salary at an annualized rate of more than $100,000 in any pay period of 2019 aren’t considered.

My company previously laid off an employee, but later offered to rehire the employee. If the employee declined the rehire offer, will my PPP loan forgiveness amount still be reduced?

Loan forgiveness will not be reduced based on an inability to rehire employees if the employer can document (1) written offers to rehire individuals who were employees of the organization on February 15, 2020; or (2) an inability to hire similarly qualified employees for unfilled positions by December 31, 2020.

Additionally, forgiveness will not be reduced for failure to maintain employment levels if the organization is able to document an inability to return to the same level of business activity as existed prior to February 15, 2020, due to compliance with COVID-19-related guidance for sanitation, social distancing, or worker or customer safety requirements from the Health and Human Services (HHS), the Centers for Disease Control and Prevention (CDC), or the Occupational Safety and Health Administration (OSHA) between March 1 and December 31, 2020.

The SBA has suggested that the documentation required above would be satisfied if an employer made a good faith, written offer of rehire at the same salary/wages and for the same number of hours, the employee rejected the offer of rehire, and the employer notified the applicable state unemployment insurance office of the employee’s rejection of rehire within 30 days. Employees who are terminated for cause, voluntarily resign, or voluntarily request and receive a reduction of hours may also be excluded from the FTEE reduction calculations.

How are payroll costs defined under the PPP?

Under the PPP, payroll costs generally include:

What happens if I use less than 60 percent of the PPP loan on payroll costs?

The Paycheck Protection Program Flexibility Act provides that “ to receive loan forgiveness under this section, an eligible recipient shall use at least 60% of the covered loan amount for payroll costs, ...”. This implies that 60% may be a minimum threshold. Consequently, it is possible that if the 60% measure is not met, none of the PPP loan will be eligible for forgiveness. Additional guidance from the Treasury Department may clarify whether the failure to meet the 60% threshold will result in a proportionate reduction in forgiveness, or denial of any forgiveness.

However, because PPP loan amounts were calculated to cover eight weeks of payroll costs, it is believed that borrowers should have sufficient time to spend 60% of PPP loan proceeds on payroll costs over the expanded 24-week covered period.

How do I apply for loan forgiveness? How long will it take?

The SBA has issued a loan forgiveness application, which can be found here. Guidance on loan forgiveness is evolving and rules may change, so check back for updates. To help you maximize the forgivable amount, consider these steps:

In the 8 weeks following receipt of the loan...

Paycheck Protection Program? Economic Injury and Disaster Loan (EIDL)? Bridge Loans? Are you overwhelmed of where to begin? 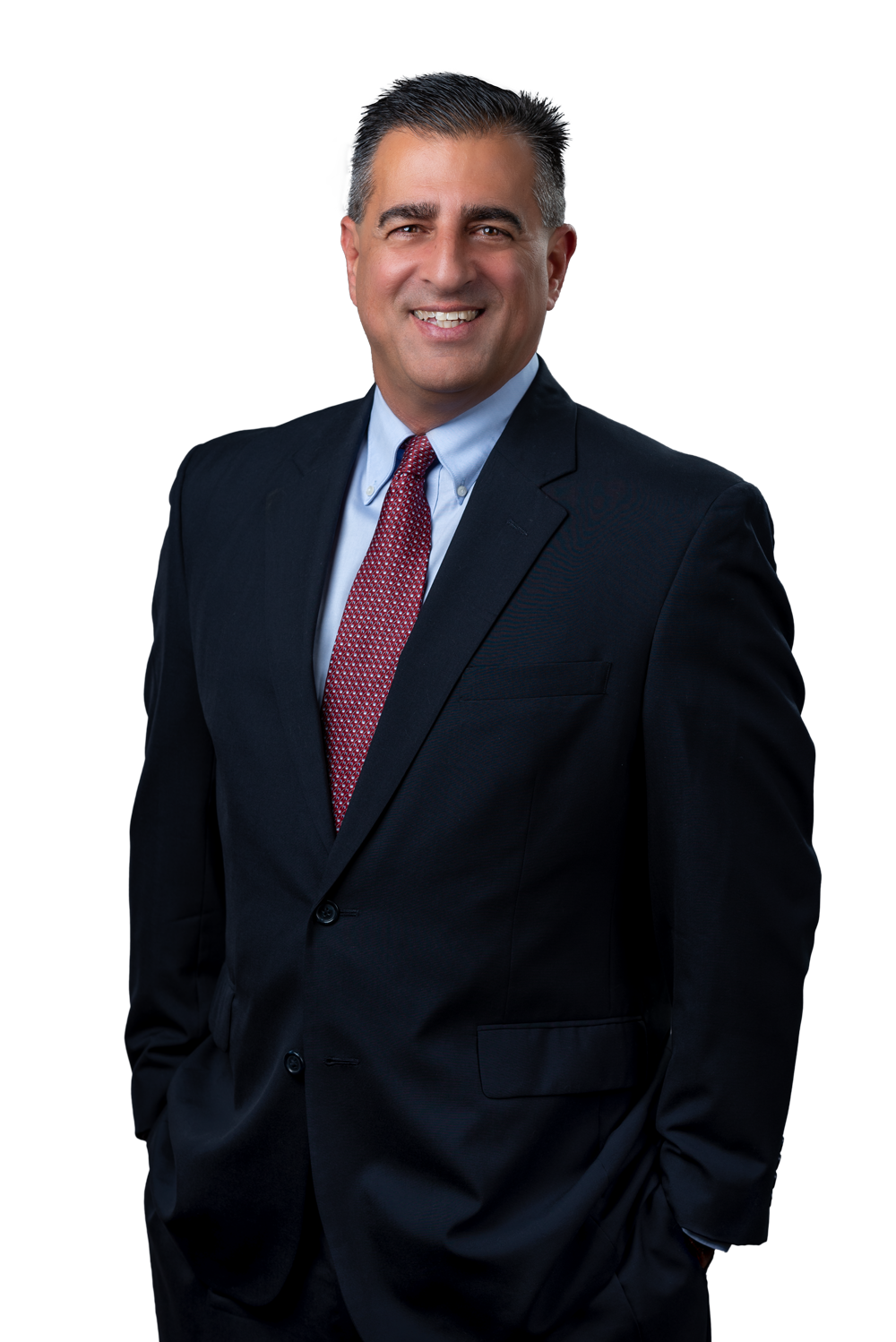 “KSDT CPA is dedicated to helping small businesses stay up and running.”

Visit our KSDT COVID small business page or download our Information Guides below. 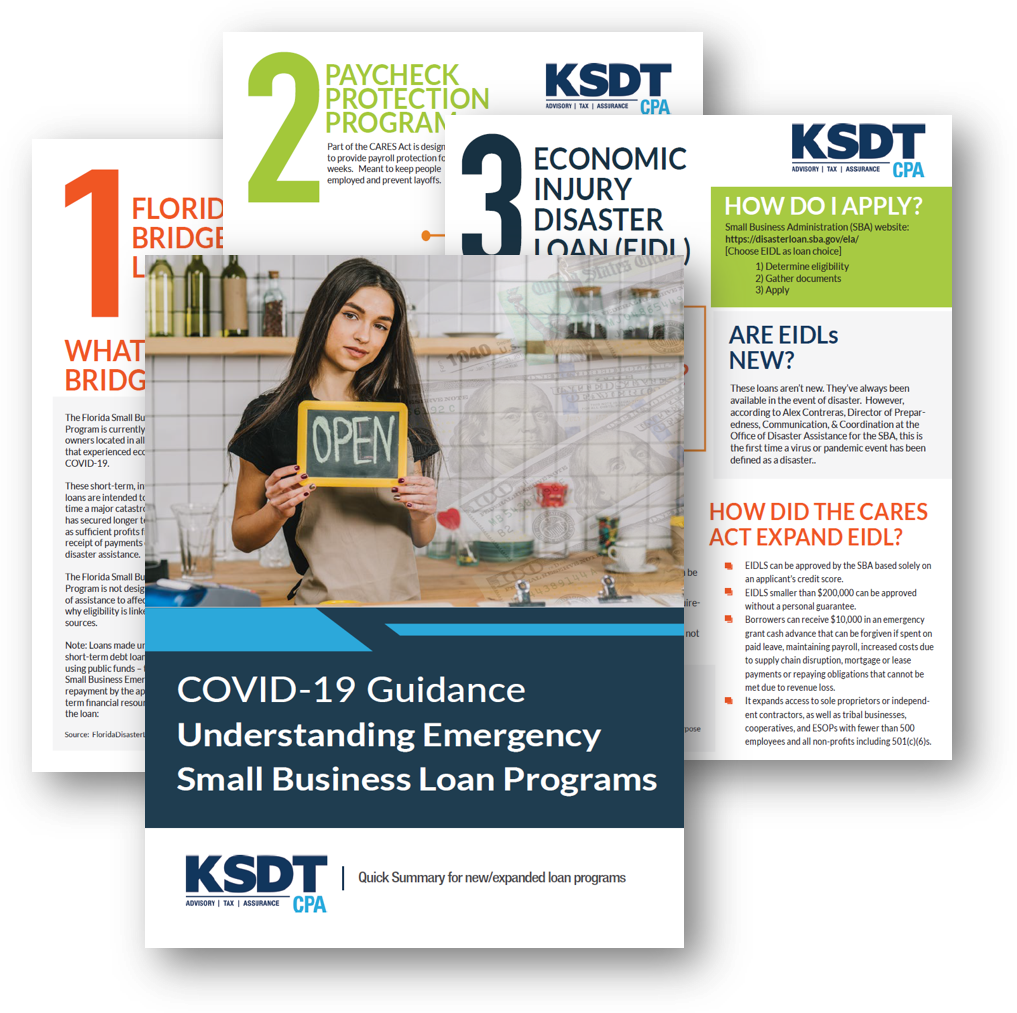 This informational guide is designed to summarize the key Emergency Loan Programs available to small businesses, such as:

This informational guide is designed to summarize the key provisions of the CARES Act available such as: 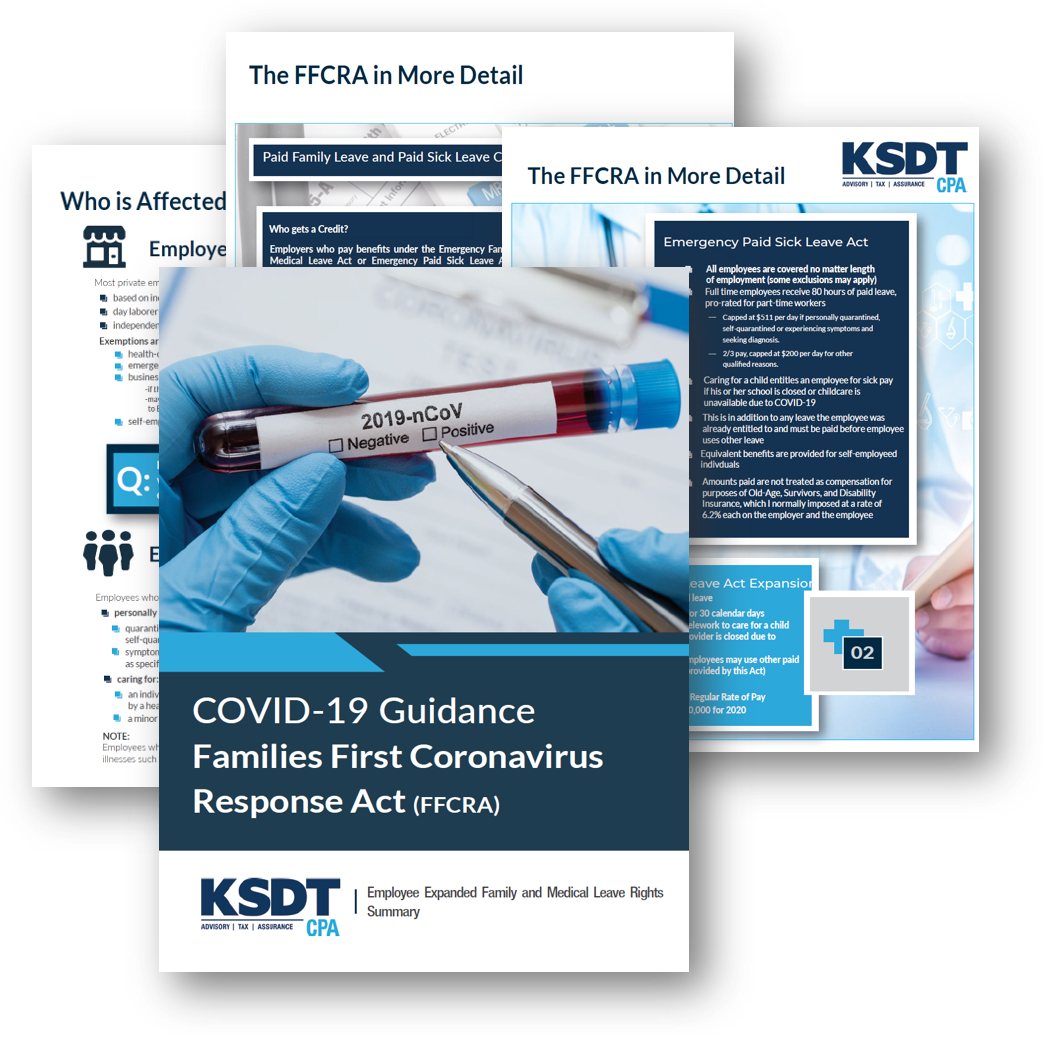 This informational guide is designed to summarize the key provisions of the FFRCA Act available such as: