The days when you could claim deductions for run-of-the-mill casualty and theft losses of personal property are gone — at least temporarily. The Tax Cuts and Jobs Act (TCJA) generally suspends write-offs for such expenses for 2018 through 2025.

However, you can still claim deductions for personal property losses caused by certain federally declared disasters, such as the COVID-19 pandemic. In addition, the Taxpayer Certainty and Disaster Tax Relief Act enhanced deductions available to eligible individuals — but only for a limited time. Here are the details.

Prior to the TCJA, you could deduct casualty and theft losses for damage to personal property resulting from a “sudden, unexpected, or unusual” event, according to the prevailing regulations. This included damage caused by natural disasters, such as hurricanes, tornadoes, fires, earthquakes and volcanoes. It also applied to such events as vehicle collisions or water pipes bursting during a severe cold snap.

Similarly, if your personal property was vandalized or stolen, the loss was deductible, along with casualty losses from natural disasters and other catastrophes. These amounts were lumped together as an itemized deduction.

For personal property that was partially or completely destroyed, the amount of your deductible casualty loss generally was the lesser of:

Before you claimed the deduction on your tax return, you had to subtract any insurance proceeds you received. 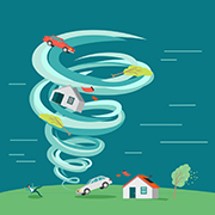 What happens if your business property — rather than your personal-use property — is stolen, destroyed or otherwise damaged by vandalism or another event? The rules for deducting business casualty and theft losses are generally similar to those for personal property losses, with a few notable exceptions.

Most important, the limits for individual casualty and theft loss deductions don’t apply. In other words, you don’t have to worry about the $100-per-event reduction or the 10%-of-adjusted gross income threshold. In general, business casualty and theft losses are fully deductible, regardless of whether the damage occurred in a federal disaster area. However, business losses are subject to the other restrictions, such as those related to salvage value and insurance reimbursements.

For example, if you operate a farm or restaurant that was unable to sell perishable food inventory during COVID-19-related lockdowns, any uninsured business property losses would be deductible under current tax law.

As with income-producing property, if business property is destroyed, the amount of your loss is your adjusted basis in the property. Any decrease in fair market value doesn’t come into play. For more information, contact your tax professional.

For example, on March 13, 2020, President Trump declared a nationwide emergency under the Stafford Act. This declaration applies to all 50 states and the District of Columbia and authorizes FEMA to provide assistance relating to the nationwide emergency for COVID-19. As a result, under current law, an individual who owns securities might be able to deduct a loss if that personal-use asset is now worthless due to COVID-19-related changes in market conditions.

Important: The TCJA preserved the other rules pertaining to casualty loss deductions. Specifically, losses under the TCJA are still subject to the limit based on 10% of AGI and the $100-per-event reduction.

Second, the Taxpayer Certainty and Disaster Tax Relief Act provides relief to taxpayers for losses in federal disaster areas occurring in 2018 through January 19, 2020. Notably, this law temporarily removed the limit based on 10% of a taxpayer’s AGI and opened up the deduction to non-itemizers. It also bumped up the per-event reduction from $100 to $500.

For example, suppose your AGI was $100,000 for 2018 and your principal residence incurred $15,000 in damage (after subtracting insurance proceeds) due to a federally declared disaster. You could write off $14,500 ($15,000 – $500). This is $9,600 more than you could deduct under the old rules. Plus, you could take this deduction regardless of whether you itemized deductions on your federal income tax return.

Would you be allowed to deduct damages to your personal residence caused by vandalism that happened during recent protests against racism and police brutality? In this case, the loss happened after the relief provided by the Taxpayer Certainty and Disaster Tax Relief Act had expired. And, as of this writing, President Trump hasn’t declared any federal disaster areas due to protest-related vandalism. Therefore, you would be unable to claim any deduction for your personal property losses under current tax law. However, business owners may be able to deduct vandalism-related losses to business property. (See “Deducting Business Casualty Losses” at right.)

Normally, you can deduct a casualty loss only on the tax return for the tax year in which the casualty occurred. This is true even if you don’t repair or replace the damaged property until a subsequent tax year. For example, if a tornado tears off your roof this summer and the tornado is declared a federal disaster, the resulting loss is deductible on the 2020 return you’ll file in 2021.

However, be aware of the following special tax election: For damage occurring in an area designated as a federal disaster, you can choose to claim the available casualty loss on the tax return for the year preceding the year of the event.

So, if you incur a loss in a federal disaster area in the second half of this year, you might amend your 2019 return to obtain faster tax relief. (Or, if you haven’t yet filed your federal income tax return for 2019, you could report the loss on your original 2019 tax return.) In other words, you don’t have to wait until you file your 2020 return to receive tax relief.

Casualty losses on personal property are generally claimed on Schedule A of your individual tax return (Form 1040) along with your other itemized deductions. Taxpayers who don’t itemize aren’t able to claim any tax benefits from casualty losses — unless the loss was covered by the temporary relief provided by the Taxpayer Certainty and Disaster Tax Relief Act.

If you qualify for a casualty loss deduction, keep accurate records and evidence to support your deduction in case the IRS ever challenges the write-off. For more information, contact your tax advisor.

The IRS has begun mailing notices to businesses, financial institutions and other payers that filed certain returns…

Are you and your spouse considering “splitting” gifts?

Gift splitting can be a valuable estate planning tool, allowing you and your spouse to maximize the…

Careful planning required for beneficiaries to borrow from a trust